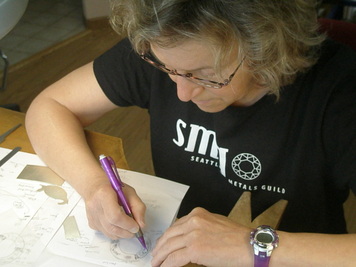 From the age of 13 Joan’s first love was always making jewelry.  However, her path led at first to an academic life.  Joan received her B.A. from the University of Michigan and her Ph.D. from Columbia University.  In 1973 research for her dissertation took her to a tiny village in Alaska where she lived with Dena'ina Athabaskans and wrote a grammar and dictionary of their endangered language.  She also compiled 24 stories for her book Dena’ina Sukdu’a: Traditional Stories of the Tanaina Athabaskans.  She later lived with Yup’ik and Iñupiaq Eskimos in several other villages, teaching and coordinating programs for the University of Alaska.  During all these years, she continued to make jewelry and never gave up her dream to one day be a full-time artist.  In 1990 Joan moved to Washington State, where she now focuses on her jewelry and teaching.

Throughout Joan’s work there is a poetry of feeling and distilled emotion which intertwines through all the pieces like a mystical leitmotiv.  The work itself consists of detailed, culture- and nature-inspired wearable pieces that are hand fabricated using precious metals and gemstones.  She uses such techniques as cloisonné enameling, engraving, chasing, repoussé, forging, roller texturing, foldforming, mokume gane, granulation, reticulation, damascene, keum boo, anticlastic raising and stone setting to create the fascinating textures, colors and contrasts that narrate her work.  Many of these pieces are part of a series exploring a theme, but each is individually hand made.  Her native culture-inspired pieces frequently take the form of a mask or human figure, symbols of the spirituality in the cultures in which she lived, or are translations of ancient stories or artifacts.  In these pieces she pays homage to some of the last remaining hunting societies, which she feels have been kept alive by their deep connection with the Arctic land and animals that support them. Her pieces that speak of landscape and animals carry environmental messages.

“I experienced first hand the three things that are the most important to the people—the land, getting food, and their families.  The anthropologist’s job is to live with the people, understand their culture and interpret it to the world.  Usually this is done through books, but I’m doing it through jewelry.”

Joan’s work is in the permanent collection of the Anchorage Museum at Rasmuson Center, and has been featured in eleven books as well as in Ornament, Lapidary Journal, Jewelry Artist, American Craft, Art Jewelry, Creating Linus Jewellery, American Style, AJM, Niche and Metalsmith magazines.